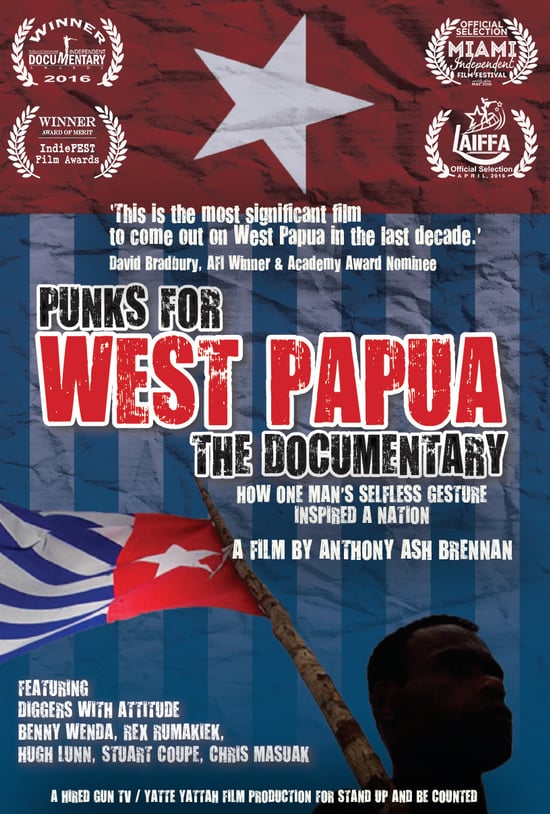 The genocide of the West Papuan people at the hands of the Indonesian military, is one of the saddest yet rarely told stories of modern times.
West Papua, a land of untold riches, was hijacked with a violent and rigged vote by Indonesia in 1969.
With the support of Australia, the USA and the United Nations, the Indonesian Military have slaughtered nearly half a million indigenous West Papuans in the years since, all in the name of a mountain of gold.
All of this kept secret by a ban on journalists and foreign aid from entering West Papua.
Thus the cry of the West Papuans has gone unheard for nearly 50 years.
But Australian Punk is loud, Very loud.
Punks for West Papua is an Australia wide movement, and the brain child of Jody Bartolo.
Jody and his band ‚Diggers with Attitude‘ spearhead Punks for West Papua with the aim to raise money and awareness for the Free West Papua cause.
A midnight text message to film maker and friend, Ash Brennan, started the wheels in motion for a small video think piece at the original Punks for West Papua benefit show at Sydney’s Town & Country Hotel.
But Jody and the Australian punk rock community would turn this event into a no holes barred Australia wide event involving over 50 bands in 7 cities around the country. Making Punks for West Papua the biggest, and no doubt, loudest punk rock event in the nations history.
The film grew with it. The P4WP film crew travelled around the country, interviewing all the main players of the movement, plus features interviews with two time Nobel peace prize nominee, Benny Wenda, journalist Hugh Lunn who was in West Papua for the 1969 vote, rock journalist Stuart Coupe and United Liberation Movement for West Papua leader, Rex Rumikiek.
Narrated by Basia Bonkowski, Punks for West Papua is an intriguing story of one man’s selfless gesture that inspired a nation and is recommended viewing for not just fans of punk rock but for anybody who believes in justice.
The complete Benny Wenda interview comes free with the rental purchase.
Proceeds from the rental of Punks for West Papua go to the United Liberation Movement for West Papua.

Anthony ‘Ash’ Brennan is an Australian filmmaker. Ash was raised in Sydney’s western suburbs, a blue-collar, multicultural environment which would shape his views on everything from music to social justice. During the 1980s and 1990s, Ash spent his days working at Network Ten in Sydney, while moonlighting as a musician in several popular hard-rock bands. His combined music and television skills led to him becoming a Senior Producer with MTV Australia and producing, shooting and editing music videos for numerous bands. Ash honed his storytelling and filmmaking skills by producing, directing and editing short films such as ‘The Conlon’ and ‘Getting Real’. Influenced by the legendary documentarian, John Pilger, in more recent years Ash has started creating political content. He is a passionate supporter of Australian Indigenous rights and consistently works with the indigenous community, telling their stories through his lens. When friends in a Sydney punk band told Ash of their plans to hold a benefit concert for West Papua, Ash saw the perfect opportunity to combine his music and political interests with his filmmaking skills. In April 2015, Ash met with West Papuan Independence Leader and two-time Nobel Peace Prize nominee, Benny Wenda. This meeting, along with the punk movement growing in Australia, would provide the catalyst for Anthony ‘Ash’ Brennan’s first documentary feature, ‘Punks For West Papua’.